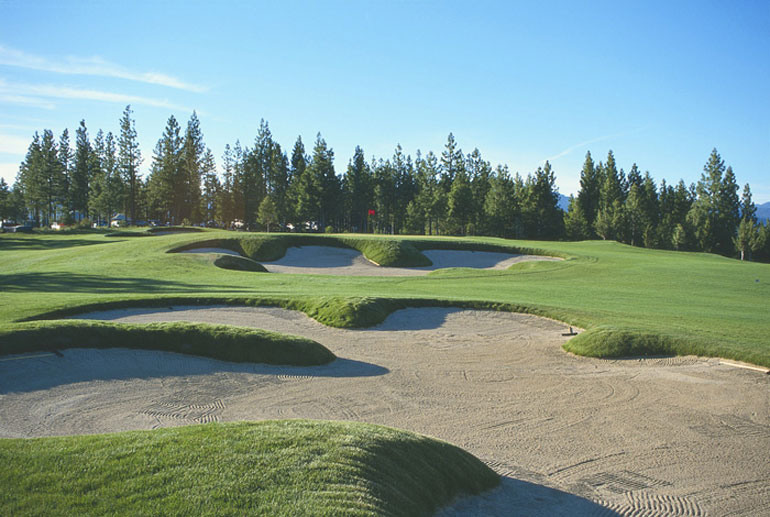 Tale of the Dragon

Before leaving Seattle for Gold Mountain, Calif., I'd heard a lot about the Dragon Golf Course, mostly in press releases from Dan Shepherd of Buffalo Communications.

In addition, a friend in the golf business now living in Seattle, Mark Miller, helped design the course when he was working with Nelson-Haworth, whose Robin Nelson is Dragon's architect of record. Mark spent several months in Plumas County during construction and was familiar with all the ins and outs of the project. So he primed me about the course and, after seeing my game at my home club, Sand Point, said I'd have a difficult time slaying the Dragon.

The resort's husband-and-wife owners, Dariel and Peggy Garner, were thorough in their search for a golf architect, interviewing some of the biggest names in the business. They settled on Nelson because of his knack for crafting "environmentally-friendly" courses. The owners' mandate for Nelson and Miller was to create one of the toughest courses in California, while minimizing the project's effects on the environment.

As noted in Part 2, the Garners had no prior background in developing resorts, and they certainly lacked experience in golf course development and construction. But, as also noted earlier, this deficiency never stopped the Garners. From a golf architect's standpoint, that naivete is sometimes good, sometimes bad. Regardless, the layout the Garners, Miller and Nelson designed and built over three years came through with flying colors. The architects fulfilled the Garners' wish: the course is a frustratingly penal but an equally delightful layout. After playing it two and a half times, I wanted another shot at the Dragon - a sentiment that may best indicate a course's appeal.

I rated the Dragon for Golfweek and gave it a solid "6," which ranks in the upper 15 percentile among the finest courses in the U.S. (Golfweek's course-ratings process will be the subject of a future journal entry.) Suffice to say, the evaluation criteria weigh heavily toward traditional, i.e., golf-only, non-residential and non-resort - courses that are tightly arrayed and easy to walk. Those standards do not fit the Dragon, which sprawls across 300 acres and has few adjoining fairways - let alone short green-to-next-tee walks for those who like hoofing it, such as I. I played one round with Robin. He and I were of the same ability - semi-solid 10 handicappers who hit the ball, then hit it again. We talked about our daughters, both in their early 20s and doing well. Earlier in the year Robin was diagnosed with prostrate cancer, but, thankfully, all signs were positive when we played in fall '03. Now based in the Bay Area, Robin plied his profession for years in Hawaii with partner, Canadian Neil Haworth. The duo have designed courses around the world, with more heralded credits including the Mauna Lani Golf Courses on the Big Island, Royal Kunia Honolulu Country Club, and Mauna Lani North and South in Kohola, Hawaii (site of the Senior Skins Game); Mimosa Golf and Country Club in the Philippines; Bali Golf and Country Club Course in Indonesia. It was a joy to play with someone so entrenched, so to speak, in the places on Earth where golf is played. And it was kinda cool to see Robin return to the Dragon for the first time in quite awhile, and catch up with the Garners and the course with his signature on it. Robin is one of several golf architects I've joined on rounds at their courses, and he was no different than the others. Every golf architect seems to carry a wisp or a wallop - depending on their emotional investment - of angst over what he/she hath wrought. There's a clear sense of, "If I'd only have been allowed to . . ." For me, it's like writing or publishing a book. I can almost guarantee that the first page I turn to I'll find a mistake - and I'm anal about that stuff! It may be undetectable to others, but the bad stuff sure as hell is detectable to me. At least a golf course architect has the chance to amend the errata, as his or her product is living and thus changeable. That became clear when, following our round, Robin turned to superintendent Rich Sholes, also in our foursome, and said, "Let's go get a beer and your chainsaw."

The Dragon's site was a challenge, as was the need to satisfy the Garners' unswerving goal to preserve native trees and wildlife habitats. Not much earth was moved during construction, uncommon for a site that involves 500 feet of elevation change. But the care was worthwhile. The course has been accepted as an Audubon Signature Sanctuary facility, the highest-rated designation offered by that organization (which, by the way, has nothing to do with the bird-loving Audubon Society).

The course boasts six sets of tees - ranging in length from 7,077 to 4,611 yards, so there are plenty of starting points for players. Impeding the quest for par are 84 bunkers, sneaky-close water hazards, forgetaboutit fairway-side rough, disconcertingly knobbish greens with steep sides, and, not surprisingly, tilted topography. The front nine opened in 1999 and the back the following year. Only 15,000 rounds a year are played on the Dragon during its six-month season, and superintendent Rich keeps the grounds in outstanding condition. All while minimizing chemicals and water usage. Like many resort courses, golfers here find each hole hyperbolically named; e.g., "Dragon's Fire," "Dragon's Lookout," "Teeth of the Dragon," "Defiance," and "Revenge."

As Peggy is the only golfer between the two Garners, she insisted the course be suitable for women. A magazine-like yardage guide is given to all guests. At the very top of each hole description is a paragraph outlining the 'Women's Viewpoint.' "Golf for Women" magazine is so smitten with the course's distaff bent that it ranks the Dragon among its "Top 100 Fairways for Women."

The Dragon is not for the faint of heart. Only two under-par rounds have been shot from the back tees (uniquely numbered here - the tips are No. 6 and the fronts No. 1) during its brief existence. Earlier this year, the owners created the $10,000 Dragon Challenge Pro-Am Invitational, which sought to find "slayers" of the Dragon. During qualifying for that event a University of Reno (Nev.) student, Justin Sollenne, shot a sparkling 4-under-par 68 from the way-backs, where the course bears a 73.5 rating and a 147 slope. Sollenne's 68 was three strokes lower than the previous mark.

There are no let-ups at the Dragon, as every hole requires grip-tightening concentration and as much skill as the player can muster. There are a couple of short par-4s - particularly notable is the nasty 4th hole (appropriately called "Faith" as that's what I needed in myself after stumbling to three straight double-bogeys on the damnable hole from the No. 5 tees), but most of the two-shotters are of the 430- plus-yard variety. The par-3s are strong, with the 13th - "Defiance" - especially tough. And the par-5s are not to be trifled with because of the wildly rolling terrain.

Because of its mountainous site, many of the landing areas lean toward serious penalty-stroke trouble. Targets off some par-4 and par-5 tees are almost in the rough to prevent Titleists from caroming into deep doo-doo on the fairway's opposite side. Dragon's greens aren't too wildly undulating. But some putting surfaces squat atop ridges with false fronts. These smallish targets have the disconcerting knack for rejecting approach shots with spin. During two of my rounds, I hit a decent drive on the 9th, a par-4 that plays much shorter than its 398 yards. Two of my second shots into that green spun off, rolling 40 yards down toward the fairway off the mowed-low face. I'd have rather been in the traps. The Scots didn't create golf for it to be an always-pleasurable experience, and the vaunted Dragon fulfills that charter. After three lengthy parts, this is my conclusion about all things Gold Mountain-Dragon-Nakoma: You gotta work to get here. But the trip will be worth it. Coming upon a Frank Lloyd Wright-designed clubhouse out in the middle of nowhere doesn't happen every day. And, Oh! - there's also a brawny golf course with great scenery.