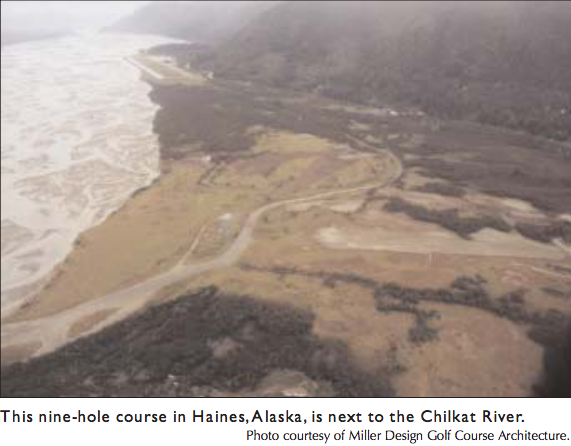 No dirt moving or pesticides will be needed.

To golf course designer Mark Miller, Valley of the Eagles will represent harmony between man and nature.

The nine-hole course under construction in Haines, Alaska, will cover about 50 acres next to the Chilkat River. The contractor is Turner Construction of Haines.

The course is owned by retired Haines physician Stan Jones and sits on a wetland. Miller, of Miller Design Golf Course Architecture, chose a design that doesn’t require moving dirt or using pesticides. Miller said the course will also use native grasses and an above-ground irrigation system.

The Army Corps of Engineers approved the golf course’s design this summer after the project was reviewed by the Alaska Department of Environmental Conservation, U.S. Fish and Wildlife, Alaska Fish and Game Habitat Division, and other state and federal agencies.

Part of the course will sit under the Chilkat River tideline, so the Corps was most concerned about the potential impact on salmon runs.

The course’s tees and greens will use borrow material from the Chilkat River. During construction the Corps will watch to make sure the borrow area — which is similar to a dredge pond — traps sediment without harming fish, said Susan Hitchcock, project manager in the Corps’ Juneau field office.

“If you just bucket load material out of the stream, you’d kill all the (salmon) with the silt,” Hitchcock said.

Miller said a typical nine-hole course might require a builder to move more than 200,000 cubic yards of dirt. He said his design for Valley of the Eagles won’t need any dirt to be moved.

The fairways will use native grasses that can tolerate saltwater, and he’ll use above-ground, rather than underground, irrigation. Sand-filled artificial turf grass will cover the tees and greens.

“You try to work with the nature that’s there,” said Miller, who designs and remodels courses around the country and in the Pacific Rim. “You try to fit the course into the environment instead of forcing it in.”

The par-36 course will be 3,000 yards long with 5,000-square-foot greens, a driving range, a putting facility and a clubhouse. Mountains surround the course and streams will influence play.

The course is planned for completion next year.