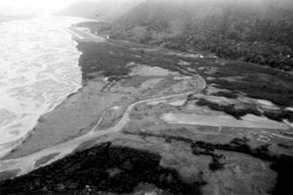 During these litigious, environmentally-hyper times, the term “wetlands” frequently is anathema to a golf course development. Such is not the case in Haines, Alaska, where a retired doctor and a visionary golf course designer are building a course smack dab in the middle of wetlands.

Work on the nine-hole Valley of the Eagles Golf Course & Driving Range began late this summer. Retired Haines physician Stan Jones owned 93 acres of wetlands alongside the Chilkat River. Golf architect Mark Miller of Seattle took a look at the site – perched under the tideline, and came up with a plan that causes minimal – if any – impact on the sensitive riparian area.

For a typical new nine-hole course, over 200,000 cubic yards of dirt are scooped, shifted and sculpted. But in the case of Valley of the Eagles, no earth will be moved. Instead, sand-filled artificial turf tees and greens will be used. These areas are being built on borrow material taken from the Chilkat. Fairways will be sown with salt-tolerant native grasses that don’t require pesticides or fertilizer. Perhaps the most curious feature of the course is that it will be irrigated, when necessary, by above-ground irrigation.

The project was reviewed by the Army Corps of Engineers, the Alaska Department of Environmental Conservation, U.S. Fish and Wildlife, Alaska Fish & Game Habitat Division, and other state and federal agencies. It was approved this summer.

Of paramount concern for all parties was the effects the course would have on native salmon. During the construction process the Corps will watch to make sure the borrow area (similar to a dredge pond) in the Chilkat traps sediment without harming fish.

Susan Hitchcock, project manager in the Corps’ Juneau office, told the Seattle Daily Journal of Commerce, “If you just bucket load material out of the stream, you’ll kill all the (salmon) with the silt. Our criteria are designed to avoid impact to wetlands. What you can’t avoid, you minimize. What you can’t minimize, you mitigate.”

“You try to work with the nature that’s there,” Miller added. “You try to fit the course into the environment instead of forcing it in.” Helping to meet that goal, Miller, who’s designed and remodeled courses around the U.S. and the Pacific Rim, has woven into the field of play 10 bridges that go over and two culverts going under the wetlands.

And what an astonishing environment Valley of the Eagles GC enjoys. The aptly named facility, which will open in summer 2004, is a prime eagle-watching spot as the majestic birds are drawn to Chilkat's salmon. The par-36, 3,000-yard layout, located west of the Haines Highway near the airport at milepost 1.5, will be augmented by a driving range, putting facility and clubhouse. Dr. Jones has said he may eventually donate the course to the town of Haines.