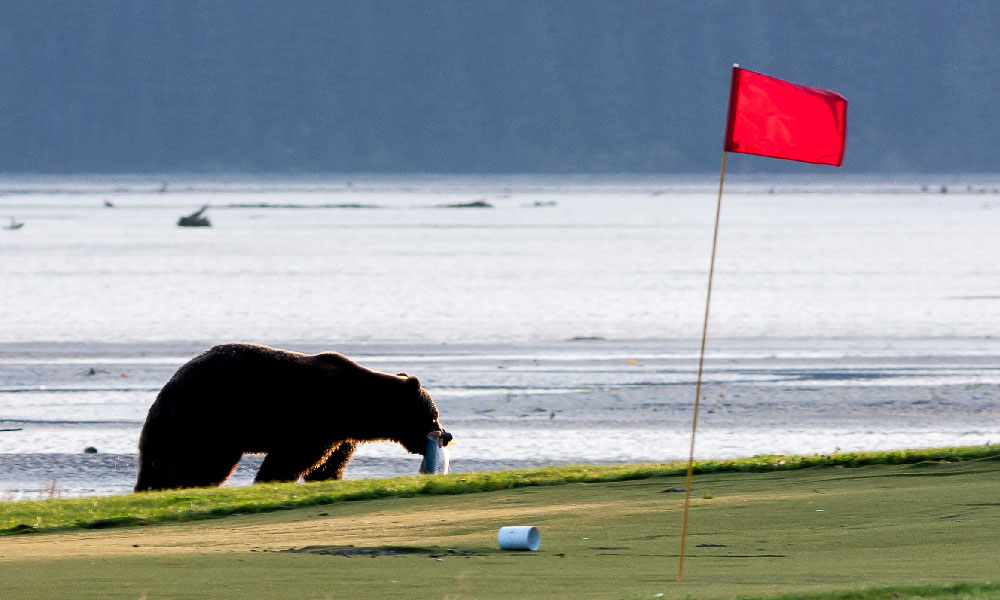 By Jeff Shelley
Posted on January 7, 2020
Article from: GolfCourseTrades.com

In my last installment, I discussed the eye-opening experiences awaiting golf writers on familiarization trips. I’ve taken many of these invitation-only boondoggles, traveling to all manner of facilities – invariably high-end – while being wined and dined after golf rounds along with fellow scribes and local muckety-mucks.

I recently went on what I’d consider a more realistic fam trip, since we footed the bill for my wife, Anni, to accompany me. This particular occasion arose when a golf course architect-friend, Mark Miller, suggested we meet up in Haines, Alaska, to see one of his creations, Valley of the Eagles Golf Links.

Mark said the man behind Valley of the Eagles, Dr. Stan Jones, was as interesting as this course built in such an unlikely place. I found Mark right on both accounts after Anni and I disembarked the Juneau-to-Haines Alaska Marine Highway ferry in late June.

Alaska is the largest state in the Union – it’s twice as big as Texas and one-fifth the size of the entire Lower 48 – and has a mere 23 golf courses (none private!). The golf season in these vast boreal reaches extends from April to October. Many of the settlements with courses are far apart and not connected by roads or highways, thus only reachable by air or water.

It should go without saying that Alaska’s traveling golfers are very dedicated lovers of the Royal & Ancient Game.

Let’s first discuss the golf course at Valley of the Eagles. It’s situated just outside the town of Haines (pop. 1,811) and directly beside Alaska’s fabled Inside Passage. Visitors can take a jaw-droppingly beautiful 4.5-hour ferry ride from the state capital, which is 60 miles by air or water from Haines.

Surrounded by majestic snowcapped peaks, the nine-hole layout opened in 2006. The routing offers broad fairways and a variety of water hazards over its 2,900 yards. Because 90 percent of the course gets covered with saltwater during extreme high tides, it was necessary to use artificial turf for the greens.

The 87-year old Jones (who definitely doesn’t act his age) worked for seven and a half years with the U.S. Corps of Engineers to get permission to build a recreational outlet on his tidal mudflat. “This could be the most self-sustaining golf course in the world,” explained Miller, who was involved throughout the construction of the unusual project. “Because the site includes sensitive salmon-rearing streams and, because it’s influenced by high tides, we had to demonstrate to State and Federal agencies how minimal the impact would be on the site.”

Jones and Miller proposed a blend of native grasses that could survive with just rainwater and didn’t require fertilizers or chemical agents. “Very minimal earthmoving was required as well,” noted the Colorado-based architect. “The natural terrain was dragged to create smooth fairways. And the 5,000-square-foot green designs were raised and supported with a variety of gentle mounding schemes that blend in with the surroundings.”

Jones told me that once-prominent glaciers have receded since he bought the 150-acre parcel in 1966. The effects of global warming over the centuries are very evident here. During the peak of the last Ice Age, nearby Glacier Bay National Park was covered by 1,700 feet of ice. At that time, the ocean level was as much as 268 feet lower than it is now! Since Dr. Jones has owned the property, he’s seen it rise 4 feet due to a geological effect called isostatic glacial rebound. Jones’s land continues to rise at an annual rate of 9/10ths of an inch.

The course is operated by a staff of three, with Jones’s wife Kathy running the pro shop and an Irishman, Niall Hackett, serving as the pro and helping Stan mow fairways. Hackett lives in an RV at the course with his girlfriend Tami and gives lessons at the driving range.

About those putting surfaces: Approach shots must land in front, as, if not, golf balls may carom over them. Stan said each green originally had four pre-cut holes (for obvious reasons, all that’s available is moving the flagsticks to different locations). But, because brown bears (note: grizzlies are also classified as brown bears but typically reside farther inland) tore out some cups, each green now has only three.

Another issue with the ersatz turf is that water drains into the cups to erode the sub-surface. When this happens, usually in advance of a new golf season, Stan and Niall must manually lift up the very heavy, water-laden carpet and fill in the ruts.

Valley of the Eagles earns a “links” designation due to its locale next to a major body of water; the need for executing run-up shots to surprisingly fast and undulating greens; lengthy fairway roll (especially during the unusual 80-plus-degree weather we experienced); and creative shot-making.

A major difference between this course and UK links are the critters found at Valley of the Eagles. In addition to the lumbering but always-dangerous brown bears that weigh up to a half-ton, visitors to Valley of the Eagles (so named because Haines boasts the world’s largest concentration of bald eagles) might encounter ducks, kingfishers, great blue heron, moose, black bear, otters, and coyotes.

A small pond was filled with black clots of tadpoles when I visited. Stan told me that, by August, the path bordering the pond has “toads 2 to 3 inches deep.” Also displayed during the golf season are an astonishing array of wildflowers – marsh marigolds, shooting stars, wild lilies, and wild irises – all of which thrive and grow supernaturally tall during Alaska’s seemingly never-ending stretches of summer sunlight.

Stan was born in Michigan. After getting his medical degree from Wayne State University in Detroit, he wanted to start a rural practice in his home state. But a young Dr. Jones decided to join the U.S. Public Health Service and, eventually, the Indian Health Service, where he became a commissioned officer. He was considered for assignment on the Pribilof Islands in the Bering Sea, but was “thankfully” sent to Sitka for his first two years of service,

Upon his discharge, Stan opened a practice in Haines and, 56 years later, he’s still here.

Stan is funny and self-deprecating. When asked why he built a golf course, the retired doctor who has delivered hundreds of Haines’ babies remarked, “I’m stupid.” More seriously, he added: “I wanted to use the property somehow. I talked to Fish & Game about creating fish habitat, and they said that wouldn’t work. I wanted to do something for the community and decided to build the golf course.”

He says that on a “good day” maybe 15-20 golfers come through (rates are $22 for nine; $38 all day). Kathy goes to the PGA Show in Orlando every two or three years to plan soft-goods purchases. One visiting pro commented that she had the best-stocked golf shop in all of Alaska.

I played in a seven-some with Stan, Anni, Mark and his wife Karen, Niall and Tami. Even though we had the place to ourselves and Alaska’s post-summer solstice left many more hours to keep hacking it around, Stan announced we needed to go to a potluck.

So, we returned to the clubhouse and found at least 60 townsfolk outside Valley of the Eagles’ small clubhouse waiting for us. They had brought along many mouth-watering dishes – including various delicious versions of native Chinook (also called king) salmon. They treated us, strangers, like old friends.

They were parishioners of the local Presbyterian Church and had been invited by the Joneses to gather and honor the departure of an interim pastor and the arrival of his permanent replacement, who had just gotten into Haines from a previous assignment in Louisiana.

The task of running a public operation 24/7 is wearing on Stan and Kathy, and they’ve hired a real estate agent to sell the property. My hope is that someone recognizes and understands the beauty found here.

A buyer might be enticed by the site, which is dwarfed by the soaring snow-capped Takshanuk Mountains across the Inside Passage. Not far from the sporty nine-holer is a 4,000-foot-long runway, suitable for private jets and smaller aircraft. Haines is also known for its world-class heli-skiing, salmon fishing, restaurants, and arts community.

Most importantly are its friendly people, as embodied by Dr. Stan Jones, his wife Kathy and their fellow congregants.

The couple isn’t sure what God has in store for them and their remarkable mudflats in remote Haines, Alaska. But, to this observer, He most surely is looking down at their Edenic slice of paradise with a kindly eye.

Jeff Shelley has written and published nine books as well as numerous articles for print and online media over the past 32 years. The Seattle resident is the co-founder of the Northwest Golf Media Association. He co-authored (with Michael Riste) “Championships & Friendships: The First 100 Years of the Pacific Northwest Golf Association.” In addition, he wrote three editions of the book, “Golf Courses of the Pacific Northwest.”